Happy Holidays! I know it’s been awhile since we’ve posted up any arcade stick related news, but we’re BACK and now is a good time to be an arcade stick fan! This post is a collected listing of all the available arcade sticks & stores that have awesome products in stock for the holiday season! Click below for all the goods! 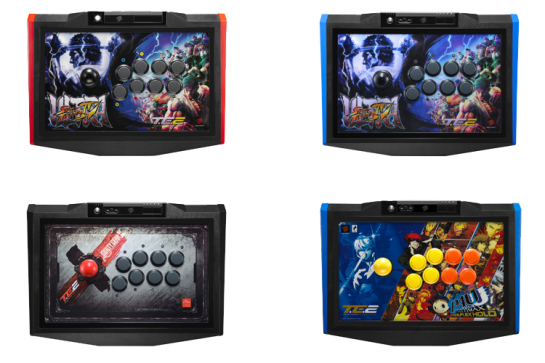 Mad Catz’ latest offerings come in form of the TE2 platform that they launched last year with their Killer Instinct version for Xbox One. Coming out this December in multiple flavors and for multiple consoles, the award winning TE2 is definitely looking like a winner for arcade stick fans. Below are links to where you can preorder them!

Razer Atrox for and Xbox One

Razer released their Xbox 360 Atrox arcade stick last year and transformed their flagship design into an Xbox One version that was announced during EVO 2014. There have been changes/improvements to the previous model and this new next-gen offering should please fans of the original Xbox 360 Atrox. You can find more information on the product below, which is available in just a few more days!

Hori introduced their premium arcade lever (Hayabusa) and buttons (Kuro) with the release of the Fighting Edge a few years ago. The parts have been received very well and has even been included as an option at some of the most popular fighting game arcades in Japan. To continue it’s success Hori has released the HRAP V4 for PS4/PS3 and HRAP V Hayabusa for Xbox One. You can find out more information on each product below.

eightarc / QanBa have continued to offer compelling quality & visual designs for the arcade stick enthusiast. While this is not an entirely new product for them, based heavily off the Q2 series from a few years ago, the changes and refinements show that they have a critical eye for quality and visual appeal. With the ‘Glow’ series and QanBa’s original LED parts, this iteration of the Q2 is by far the most robust LED option out the box experience for arcade sticks on the market today. More information via eightarc below!

etokki is always raising the bar when it comes to quality and design. If it ain’t broke, don’t fix it! The 5th revision of the popular Omni series of arcade sticks comes in both the Japanese (Sanwa) and Korean (Myoungshin lever and Crown buttons) flavor. The solid metal base is what the VSHG wishes it could have been! This stick is very popular amongst top players for both 2D and 3D fighting games that need the varied precision of a Korean lever. On top of it’s solid construction the Omni also has compatibility with Xbox 360, PS3 and PC. For more information on both versions, please click below:

There are just SO many arcade sticks out on the market now. The great thing about it is that you can really find the one that fits your gaming lifestyle and appeals to you. If none of the above listed arcade sticks work for you, then maybe one of the below will tickle your fancy?

Aside from all the awesome arcade sticks, there are a lot of cool accessories and products that help compliment your weapon(s) of choice! Below are some of our favorite shops where you can secure some cool gear & arcade stuff!